Waubgeshig Rice is an author and journalist from Wasauksing First Nation on Georgian Bay. He has written three fiction titles, and his short stories and essays have been published in numerous anthologies. His most recent novel, Moon of the Crusted Snow, was published in 2018 and became a national bestseller. He graduated from Ryerson University’s journalism program in 2002, and spent the bulk of his journalism career at CBC, most recently as host of Up North, the afternoon radio program for northern Ontario. He lives in Sudbury with his wife and two sons. Legacy is his debut novel. 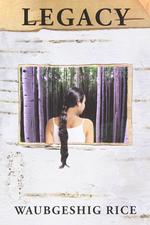