Stephen McGregor is Algonquin from the Kitigan Zibi Reserve at Maniwaki, Quebec. He is a strong advocate on the contributions and sacrifices of First Nations soldiers in Canada's wars overseas, a subject that is largely unacknowledged in Canada. Storytelling has always been a strong tradition of community life at Kitigan Zibi, which influenced Stephen as a boy, and he credits many Algonquins for passing on this gift to him. Stephen has been writing for 15 years and published a history book entitled Since Time Immemorial: Our Story in 2004. Two Trails Narrow is his second book. 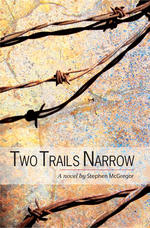