Sandra Laronde hails from the Teme-Augama-Anishnaabe (People of the Deep Water) in Temagami, Ontario, and resides in Toronto. As the founder and artistic producer of Native Women in the Arts, Sandra works as an actor, dancer and writer. She is a founding artistic director of Red Sky Performance. She has written for CBC Radio and is a play creator in residence at Canadian Stage.Sandra's writing appears in Cultures in Transition (McGraw-Hill), Chinook Winds (Banff Centre Press), Gatherings (Theytus Books) and Crisp Blue Edges (Theytus Books). She is a co-editor of My Home As I Remember and Sweetgrass Grows All Around Her, both published by Native Women in the Arts. Sky Woman: Indigenous Women Who Have Shaped, Moved or Inspired Us is her first book with Theytus. 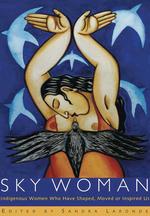